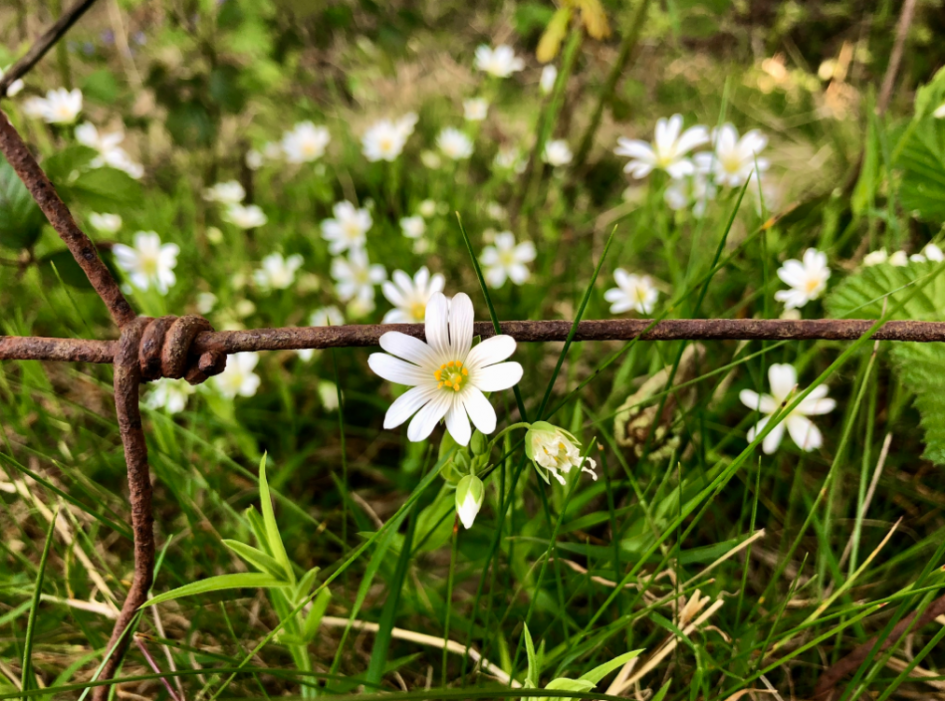 Heard the one about the Englishman who went up a hill and came down a mountain? You may have seen the Hugh Grant film, based on a story about the village of Taffs Well and Mynydd y Garth, which hulks over it, but, lately, there’s a far more important question than the Garth’s height. In a local lockdown, is it in Cardiff or Rhondda Cynon Taf? 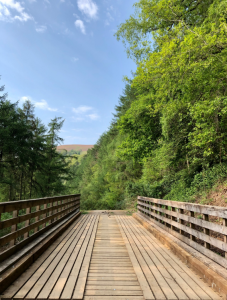 Well, the answer is both, as the Garth’s long ridge and three burial mounds indeed belong to Cardiff, but the northern flank of the hill is in RCT. From tomorrow, however, it’s a moot point, as Wales goes into a national lockdown and the local boundary police stand down. If you live within walking distance of this circular route – whether the posh side of the Garth or, erm, my side – you can access it from pretty much all directions and any number of start/finish points along the way. But bear in mind that Welsh Government is asking people not to drive to a walking route (with a small number of exceptions), so if it’s not on your doorstep, it’s one to keep for November 9.

One of my newly-discovered routes, this five-mile circuit has become a walking and trail running favourite through the pandemic. From my home, it extends to a challengingly hilly nine miles that has certainly whipped me into shape (actually, it’s just whipped me – by August, the brambles in Coed y Gedrys were vicious, but it becomes more pleasantly accessible as nature recedes for autumn). The introduction of local lockdowns led to a new, unforeseen dilemma nearly as serious as being unable to hike in the Beacons, as I was suddenly restricted from doing half of the route. But this latest development – which kicks in, by the way, on the very day I come out of self-isolation – allows me to once again notch up the full loop. Here’s how!

1. From the Tabernacl, follow the country lane east, away from Ffordd y Capel. Continue along the lane for a mile, passing Dryscoed Farm on the left and Ty Newydd Farm on the right.

2. Just after Ty Newydd, the lane descends for a short distance to reach a fork. Stay right and continue to a right-angle bend in the road. Leave the road and take the track away from the bend, through the wide gate. 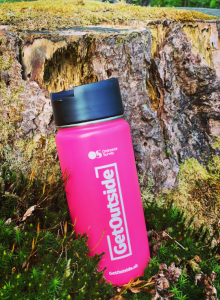 3. Shortly after the gate, look for the footpath into Coed y Gedrys woods to the left of the track. The first section can be quite overgrown and muddy but the path remains visible all the way. Note this is also a bridleway and, due to the density of the trees, you might suddenly see a horse approaching at close quarters! Look right and you’ll see a clearing with tree stumps set into a mossy bank, which is a nice spot for a brew.

4. The path gradually starts to run downhill until reaching a wide gravel track. Turn right and follow the track south as it gently rises and falls. It opens out at one point and crosses a big wooden bridge, before climbing back into the trees. As it does so, there are a number of secondary footpaths branching steeply to the summit, but our route continues ahead.

5. Eventually the path reaches a metal gate just short of a hairpin bend in the road. In non-locked down times, follow the road downhill to the Gwaelod y Garth (meaning ‘foot of the Garth’) Inn for a great selection of sandwiches and a renowned range of ale. A log fire has warmed me there after many a winter’s walk, while a small courtyard at the front of the pub is a real sun trap on warm days. The Gwaelod is a good alternative start/finish point to the walk, although parking in the village can be tricky if the rear car park’s full.

6. At the hairpin bend, follow the road uphill (warning: this is the steepest section of the route!). Just beyond a cattle grid, the climb eases up a little, before finally levelling out. The views across Cardiff and over the Bristol Channel, to Flat Holm and Steep Holm islands, are superb from here on a clear day, and it’s undoubtedly the side from which to see the sun rise. 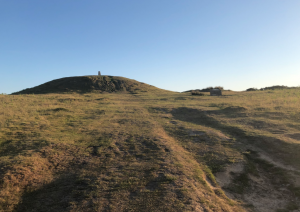 7. Continue along the lane for about a mile, passing some cottages. A number of footpaths lead uphill from the lane, including the Taff Ely Ridgeway Trail, should you wish to bag the trig point, and you can also make the detour by heading right at a sharp and obvious fork opposite a small layby, to climb to the summit. But I’m going to leave the trig and the ridge for a forthcoming route and continue around the Garth’s perimeter for a gentler walk, without the numbers that often set out to the top from this point. 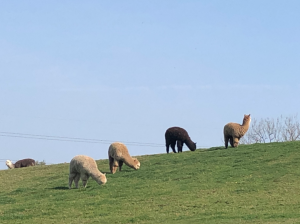 8. At the fork, descend to the left and through the gate next to the cattle grid. At the T-junction, turn right; there’s a bit of a climb again, but it’s not too strenuous. The next section is a peaceful stretch along a country road, passing clusters of cottages, woodland and open fields – and the odd alpaca or two!

9. Now running north, the road eventually descends, past the substantial walled grounds of a private house and over a pretty stone bridge crossing a small stream called Nant y Felin. From here, it’s a short stroll back to Efail Isaf, passing a street called Waun Hir and reaching the Carpenter’s pub on the corner. Turn right onto Ffordd y Capel and return to the Tabernacl.

You can find the full route at OS Maps. The basic version of OS Maps is free or you can subscribe for just £2.99 per month, which gives you access to thousands of routes and maps covering the whole of Great Britain.

Oh, and that Hugh Grant film? It’s based on the rather flimsy premise that the villagers believe they have a mountain but, when measured, it’s found to be just short of 1,000ft and re-branded a hill. Cue a gritty and determined campaign to upgrade its stature, and much cliched Welsh hilarity all round.

Thing is… in real life, mountains are 2,000ft or more. So at a height of 1,007ft, and despite the ‘mynydd’ in its name, the Garth still falls somewhat short of that magical mountain status. Just don’t tell Hugh. 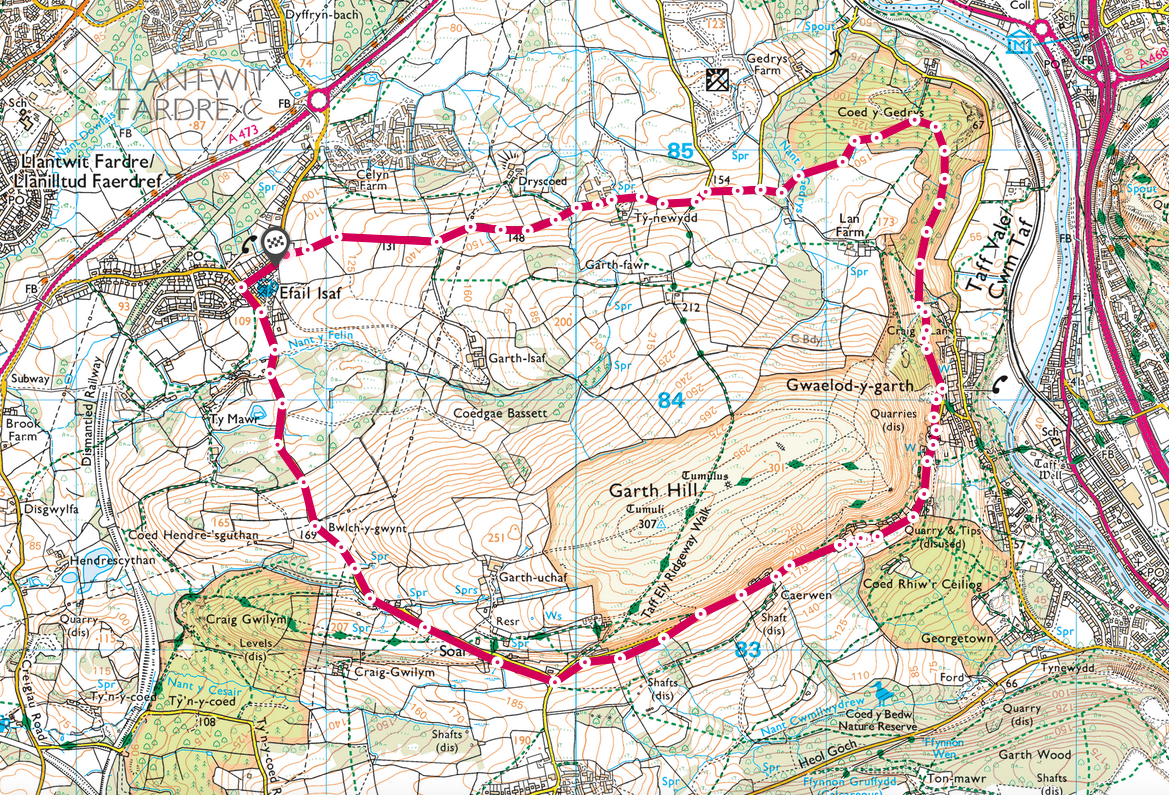