Mountain biking in the Afan Valley 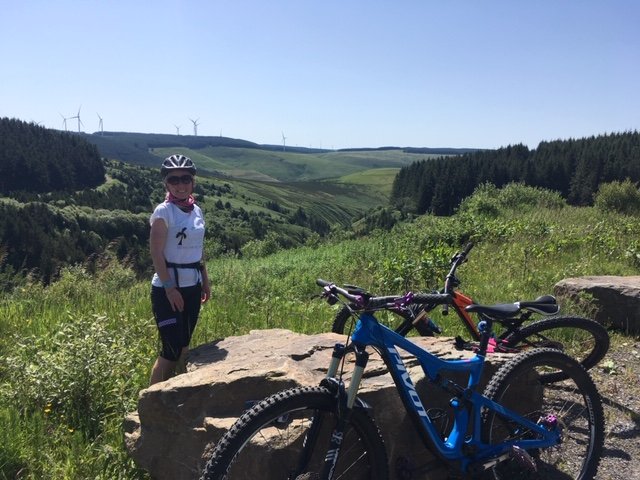 I’m zipping down the Helter Skelter, knuckles and several other parts of me white. I say ‘zipping’; I could probably hike faster, but when you haven’t done this for, oh, about 33 years, it feels as gravity defying as being propelled over the edge of Alton Towers’ Oblivion. I haven’t done that for a good few years, either. 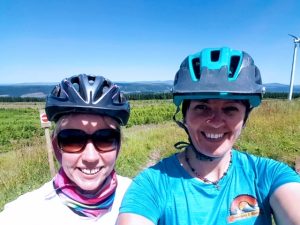 Nope, I’m not at a theme park. I’m riding a bike and having the kind of fun you appreciate only after it’s stopped and your two feet are firmly back on the ground. I’m with the lovely Sarah Wakefield of Mountains and Memories Guided Rides for Women, a skilled and patient mountain biker who started guiding and coaching with ladies exactly like me in mind. Her core customer base is (*cough*) over 40, hasn’t set foot on a pedal since her Cycling Proficiency test and, having done the hard part of parenting, is now enjoying a little more free time in which to explore adventure playgrounds of a whole new kind. 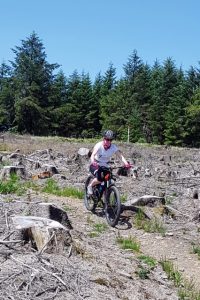 Sarah’s based in the Afan Valley, an Alpine-esque thread of Wales that remains largely unexplored by anyone other than dedicated mountain bikers and walkers. With the Beacons to the east and glorious Gower west, Afan is, in a way, understandably overlooked – which makes it all the more magical for those in the know. Taking a well-earned pitstop at Beacon View and breathing in the 180° panorama from Pen y Fan to a clear blue sea, it’s hard not to feel just a teeny bit smug to be one of those people.

Mum-of-three Sarah launched Mountains and Memories last year, keen to return to work and do something a little out of the ordinary. That she’s turned her passion into a successful business is all the more remarkable given that she herself only started cycling six years ago. Her first ride was so wobbly that her husband – an experienced rider who owns a bike shop – suggested gently that ‘maybe mountain biking isn’t for you’. Today she’s a qualified British Cycling mountain bike level 2 guide and coach and holds Bronze and Silver National Navigation Awards, as well as an outdoor level 3 first aid certificate.

Safety is indeed the first point of the day, Sarah explaining before we set out that she carries a first aid kit at all times and showing me how to access an emergency app on her phone, should I need to. And then we’re off, me shakily, grinding our way up the forest road from Willow Springs Campsite in Glyncorrwg. 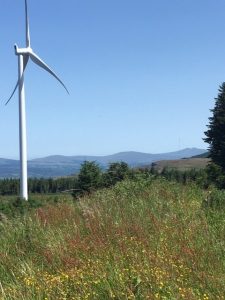 The track is unforgivingly gravelly, the midday sun blazing, and I quickly realise how lazy my cycling muscles are. I’m not unfit for a 40-something mum with a Cycling Proficiency certificate, but this is pure exertion – and I love it. The hillside around us a quilt of emerald, juniper and jade, the sky cloudless. We’re the only people for miles and the air is still and expectant, as if all of nature is breathing in, waiting for me to fall off. I’m hopeless with the gears, which I’m sure is making my thighs push harder than they need to, but I feel gleeful in that way I last did, oh, about 33 years ago.

The path levels west and we’re soon at the trig, one of us gasping for that break. South Wales fans out and Sarah points out local landmarks, mostly visible and some in a distant ‘over there’, such as the quarry pools of Llyn Fawr and Llyn Fach. Sarah shows me aqua-bright photos on her phone and I quickly add the pools to my visit list, amazed to learn of yet another Valleys treasure that most of us simply pass by, unknowingly.

Afan Forest Park is one of a number of Mountain Bike Wales centres and adjacent to BikePark Wales, with easy access between the two. National Cycle Network route 47 cuts across Afan on its way from Newport to Fishguard and links with route 887, running directly from Glyncorrwg to the beach. We’ve been trundling at my pace, with leisurely encouragement and tips from Sarah as we go, and I can easily see that her guided rides would suit even the least experienced cyclist, with no pressure to reach anywhere in particular any time soon.

In addition to the half-day guided rides, Sarah offers tailored coaching sessions that are limited to groups of four and usually attract pairs – either couples or friends – who are new to mountain biking. Sarah’s knowledge of every route, off-piste trail and fire road is second to none, allowing her to continually calculate plans B, C and D, as riders’ ability dictates. “Afan’s a mecca for bikers but I want to show something a bit different, something that’s not on the map,” she says. “Afan is awesome because you have all the marked trails and the Bike Park, but you’ve also got the off-piste trails that fewer people know about, and it’s lovely to be able to share them.” 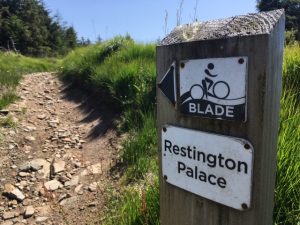 We finally prise our eyes away from ‘that’ view and head off again, this time on a thin, bumpy trail called Restington Palace. We start to pick up pace and descend the Helter Skelter, which is where – I’m ashamed to say – my nerve fails. Mentally, a switch trips and my brain decides I simply can’t. Give me Crib Goch any day.

We walk our bikes back to the forest track and I hop onto the saddle for the final whizz to Willow Springs. We’ve only been out for two hours but I’m starving, sweating and sore in more places than those worked on the entire 3 Peaks Challenge. Will I go mountain biking again? Absolutely. Do I need a few restful strolls up some mountains first? You bet I do.

Outdoor blogging, Reviews, Travel Writing, What to do