Solo camping for the soul 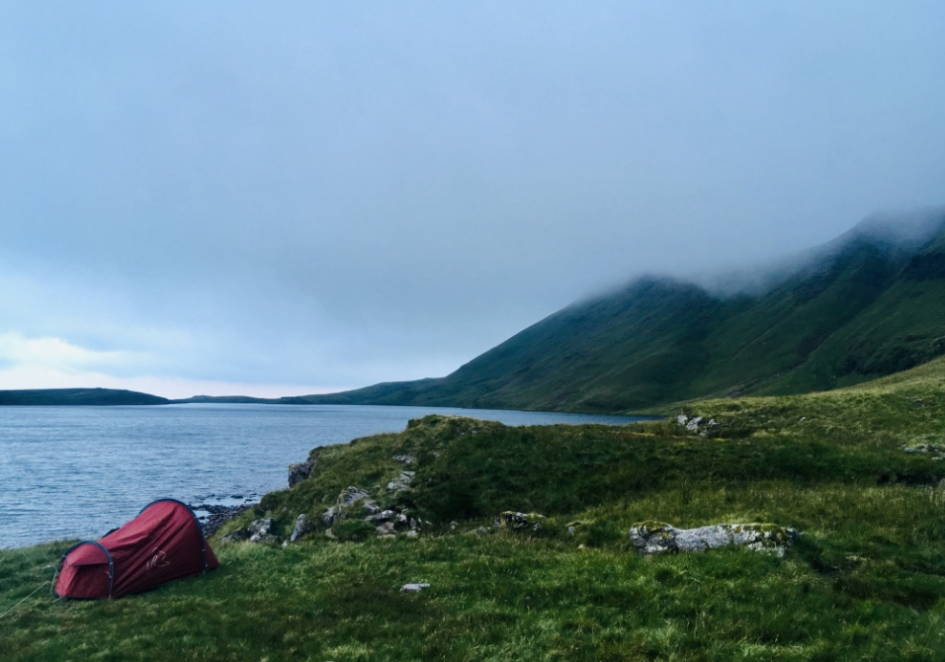 I walk on a record-breakingly hot day into the sun, the table-top ridge of Fan Hir and Brycheiniog silhouetting my destination. The upland slopes are still sloshy in spite of the lingering dry spell and I know I’m home, high above the Swansea Valley on Mynydd Du, where the hiraeth always softens. 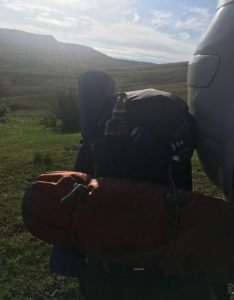 I’m trekking towards my first solo camp, bearing a whole cargo of shiny new kit – Robens tent, Vango sleeping bag, LifeStraw, Hydroflask – all bundled together in a shiny new rucksack. A fully loaded backpack should weigh no more than 20% of one’s bodyweight, I read; mine’s about 25% but surprisingly unburdensome in the remarkably comfortable Vango F10 Hut, a 45 litre rucksack with mattress-like straps. An assortment of handy compartments are in exactly the right places; the problem seems to lie with certain parts of my body, which clearly aren’t. The Vango’s chest strap, rather than sitting snugly above the body parts, is giving some seriously squashed boobage. I think of Ginger Rogers, doing everything Fred Astaire did but backwards, in high heels. Backwards, in high heels and with squashed boobage, I add mentally. Guys, you have no idea. 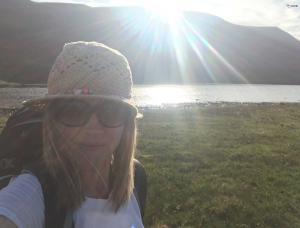 My first solo camping spot, at the north west corner of Llyn y Fan Fawr, has been picked out months ago, in the dying light of a head-clearingly crisp walk to welcome in another new year. It was only ever going to be here, tucked against the shelter of the long ridge, views skimming across deep blue to the faraway pinnacles of the eastern Beacons. 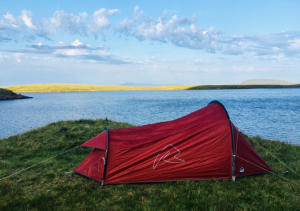 Two nights before I trek, post-work, towards the lake, a lightning storm splinters roofs and ignites an historic bell tower. I google ‘camping in lightning’ and learn the 30/30 rule – if lightning follows thunder within 30 seconds, I need to get out of my cosy new sleeping bag and tent pronto – and it’s not safe to get back in until 30 minutes after the last clap of thunder. I also learn that five out of six people killed by lightning are men. Guys, us ladies have no idea. The squashed boobage suddenly doesn’t seem so much of a raw deal. 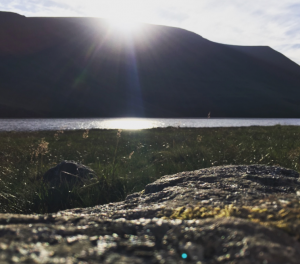 I near the lake, the voices of young men travelling across the water before their bright blue tent merges into view. I’m not sure if I’m comforted or worried by the proximity of other people, but they wave a friendly hello and my hopes rise as I pass on to the far corner of the sprawling shore. There’s plenty of room for all of us, I reason, and besides, I’m doing the maths. There are three of them and one of me. If lightning strikes, my odds of surviving the night intact are favourable indeed. 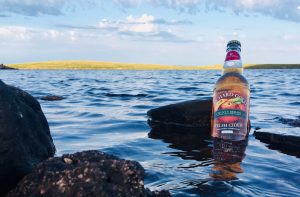 The sun bows behind Fan Foel as I sink shiny new pegs into soft earth and plunge a celebratory cider into clear, cooling waters. Less than two hours after setting out from the van, I’m tucking into a gourmet dinner (chicken chunks in obligatory creamy camping pasta), my working day a world away. Swirls of mist creep down the slopes behind me, defying the heat of the day, but, ahead, the waters dance and Pen y Fan and Corn Du dapple and glow. 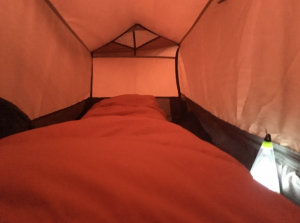 I’m ostensibly testing the shiny new kit and making notes about the marvellous compartments (not to mention the squashed bits). But really, we test ourselves, inching back boundaries to make our worlds just that tiny bit bigger, and brighter. To many, a solo camp above the Swansea Valley is the smallest of goals, but this one’s my goal, and I’m here.

The lake sparkles. Skylarks dip and the edges of my world inch outwards.