Peaks of perfection on charity challenge 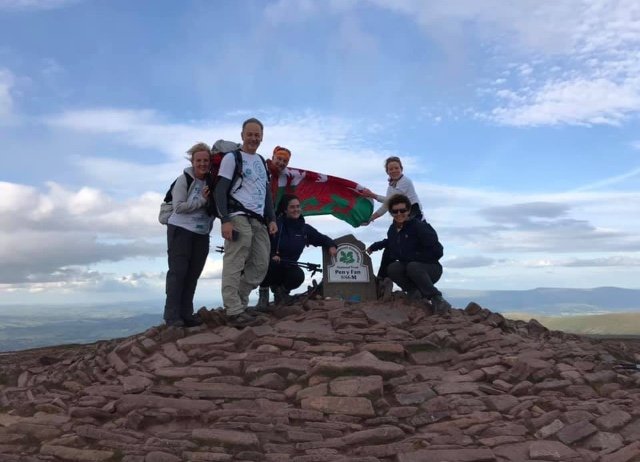 I’m scrabbling up loose rock on the eastern flank of Snowdon. It’s raining sideways and everything’s grey – not because it’s 5.30am but because it’s one of the 348 mornings of the year in Wales when everything just is. I’ve been kit-checked by an official – waterproofs, bivvy, torch, map, jelly babies – and allowed to pass go but, with one hand on the next rockhold, I realise with horror I’ve left an absolute essential behind. A comb. 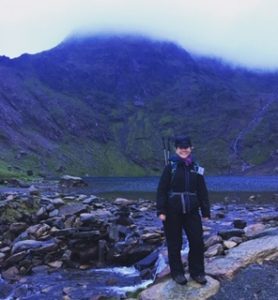 Have I ever told you about my hair? Let me tell ya, if you ever see me out on a Friday night, I’ve been straightening it since Tuesday. In its natural state it’s not sleek and it’s not curly (I would love curly); it’s just there, and there’s a lot of it. The rain is not my hair’s friend. Think Monica in Barbados then add a couple of Snowdonia sheep, pre-shear. I mutter a prayer of thanks for my new fleece-lined, waterproof hat from OEX. Who cares about the brutal weather; if it saves 200+ other dawn hikers the sight of my bouffant, it’s the kindest £10 I’ve ever parted with. 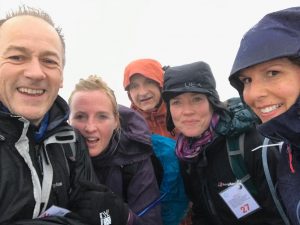 I’m on the Welsh 3 Peaks Challenge with a merry band of men and women, united in our fundraising efforts for Ty Hafan children’s hospice. North, mid and south Wales’ highest mountains in 15 hours, including the 135-mile drive between. We summit Yr Wyddfa and join the photo queue, already a few score deep at 6.38am. We muster a bit of elation, but there are another two peaks and a long way to go. Like I said, it’s a challenge. 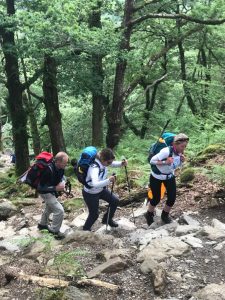 By Dolgellau, the rain has stopped. We swap sou’westers for sun cream and slog our way upwards through the lush Celtic rainforest that hems Cadair Idris. Ah, Cadair! I have loved you so long but, right now, we’re on a break. I know the first, knee-wobbling hour of this mountain was always going to be the toughest part of the day. “This is the toughest part of the day,” I wheeze to my team-mates. I expect platitudes (“Aw come on, hun, you got this!”) but instead I get the no-nonsense practicality of glucose tablets shovelled between gritted teeth. When you don’t eat sugar ‘except when hiking,’ this is a whole lot better than cliches, and I buzz on up to Llyn Cau. 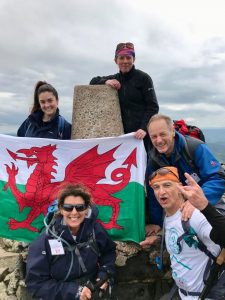 We’re up and down the Minffordd path in four and a half hours; pretty good going, we reckon, having already scaled the highest bit of Wales and England. We bag Pen y Gadair at 1.30pm and I expect the trudge back up Mynydd Pencoed, the secondary peak, to be a toughie, but it’s fine. I break open the jelly babies anyway and hand them round. A member of our team sulks because he gets a yellow one. They break your spirit, these mountains. 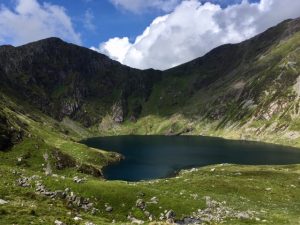 We arrive back at the crew van to a singing kettle, hot tea and news of a couple who’ve apparently just split up somewhere on the mountain. And walking’s good for your health, they say. By the account that reaches our ears, the guy is refusing to take another step and marshals have been despatched to retrieve him. He sounds remarkably like a couple of the men I’ve dated. There’s at least one ex I’d merrily leave high on a shaky scree slope, especially if I were in sight of a hiking PB.

Pen y Fan, that easy-peasiest of mountains, is pure toil, but the sky’s still cornflower and the sun warm. We reach the summit at 7.12pm, almost 15 hours to the minute after setting out along the Miners’ Track under headtorch light. We’ve hiked three mountains, nearly 22 miles and more than 48,000 steps on pure sugar. Every bone hurts and I’ve a few loose toes to sew back on but, compared to the absence of a comb, the pain is mild. We hang on to our Welsh flag in a stiff gale that whistles through our teeth as we grin for the final photo. 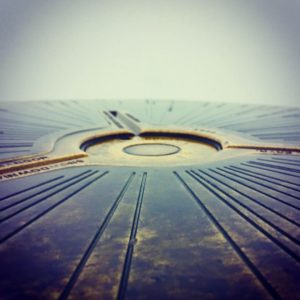 Ty Hafan provides care for life-limited children and their families in Wales. It needs to raise £4.2m annually and has helped more than 800 children in its 21 years. We turn into the fierce wind and start a quick march back to Pont ar Daf. With cash donations still to add, we’ve raised more than £1,600 towards that £4.2m. From here, I could almost run.