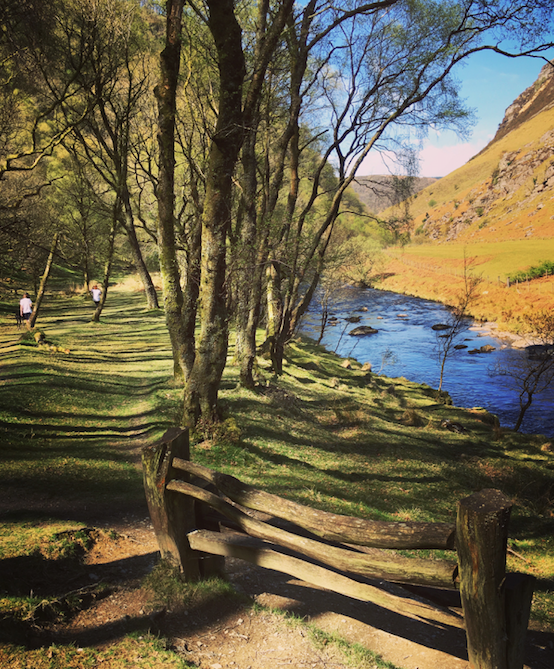 We’re heading to the only place in Wales that the teens don’t mind being without wifi. It’s Easter, which is synonymous with Rhandirmwyn, our favourite hideaway campsite deep in Carmarthenshire; so deep, it’s nearly in Ceredigion. I’ve actually heard of people from London who will jet off to Bangkok but won’t go to Ceredigion. Perhaps there’s better wifi in Thailand.

Every year I ask the teens if they want to kick off the camping season somewhere else and every year they look at me aghast, despite the dearth of wifi and Rhandirmwyn not being synonymous with ‘sunshine’. Last Easter saw us rock-pegging our tent to a gravel hardstanding due to flooded grass pitches but, somehow, this year we strike weather gold. It’s boiling, and I excitedly pack our new camping fridge.

We pitch up, plug the camping extension lead into the electric hook-up and search the van for the connection cables. Bugger, the connection cables! A vision of cables atop a shelf in the shed pops into my head. We drive to Llandovery in search of electrical supplies. It’s Easter Saturday; Llandovery is closed until Tuesday. We pootle back to Rhandirmwyn and watch all the Easter eggs melt. This would never have happened in the great flood of ‘18, I tell the teens ruefully. 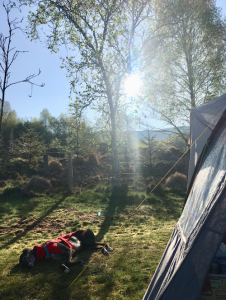 Rhandirmwyn is a Camping & Caravanning Club site; you don’t have to be a member of the club to stay, although members benefit from lower pitch prices. I love C&CC sites. The organisation isn’t called ‘the Friendly Club’ for nothing; site managers and fellow campers alike are chirpy and obliging – as long as you strictly observe the six-metre rule. And, best of all, everyone has to be quiet.

Whenever I book a campsite, I anxiously scan the listing for one word – clubhouse. If your idea of camping heaven is a bar, disco and children’s club, turn the page now, because if ‘clubhouse’ is down, we’re not coming in. The dawn chorus is about as noisy as C&CC sites get, but what they lack in ‘entertainment’ they make up for – and then some – with glorious settings and lots of fresh air. Many sites also have a small play area and a dedicated dog walk, and Rhandirmwyn’s riverside run for retired greyhounds seems to stretch the full seven miles back to Llandovery.

The showers are a-maz-ing; hot, hot, hot and with none of that push-button-every-20-seconds crap. The cubicles are take-my-flip-flops-off clean, with a little bench and plenty of space between the cubicle door and the shower curtain, as well as several pegs to ensure clothes stay dry. If I’m being extremely picky, the overall upkeep of the loo block seems to have dipped teensily from ‘outstanding’ to ‘ever so good’ since our last visit, while the reception at reception is a notch below the warmth of the previous site managers, who retired last season. But ‘ever so good’ is a sturdy guyline’s length away from ‘clubhouse’, plus the ice cream freezer in the little shop is actually plugged in, and it’s too boiling to drive away. 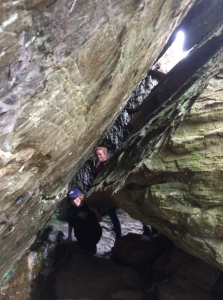 Off-site, this is the landscape for red kite likers, hikers and bikers. On the doorstep of the Cambrian Mountains, Rhandirmwyn is surrounded by some of the most spectacular scenery in Wales, with, of course, the odd local legend or two thrown in to keep visitors smiling. Just up the road is the cave of Twm Sion Cati, an Elizabethan outlaw who stole from the rich to give to the poor (yes, we have that sort in Wales, too). To escape from the Sheriff of Carmarthenshire, he hid in the rockface high above the River Towy, now part of the RSPB Gwenffrwd-Dinas Nature Reserve.

The boardwalk trail to the cave is well-marked through a lush bluebell wood, but be prepared for a steep final scramble and some breathing in to squeeze inside! Clambering through the narrow entrance is a fun adventure for children and even for wifi-less teens and, once you’re in, the space opens up to reveal intricate, centuries-old graffiti carved into the walls. 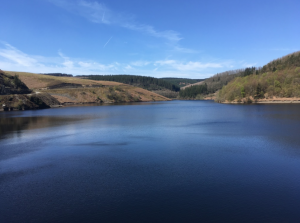 The sprawling Llyn Brianne reservoir, a few miles further on again, is the place to cook hotdogs and smores as the sun goes down, while the dam car park is a good base for gratifyingly people-free forays in the Dalarwen Forestry and the Doethie Valley, a luxuriant stretch of the Cambrian Way. The notorious Devil’s Staircase section of the Abergwesyn Pass is a favourite of bikers, while Strata Florida Abbey and the charming Vale of Rheidol steam railway are an hour’s drive north and the lake of legends, Llyn y Fan Fach, is to the south.

If you can’t face cooking on the campfire after a busy day exploring, the Royal Oak, serving excellent food and creative veggie options such as hummus and halumi burgers on brioche, is a 10-minute stroll in one direction. A mile and a half the other way is the Towy Bridge Inn (motto: muddy boots and dirty paws welcome), where you’ll find a warm croeso and the cwtchiest of bars when the Welsh weather is doing its worst, as well as riverside tables for boiling Easter bank holidays.

Now, about that internet connection. As I check in, already blissfully unmindful of work and Facebook, I’m told that new for 2019 is FREE wifi, and here’s the code. I glance over at two teens waiting in the T5 and briefly ponder whether they need ever know. Then I remember how eagle-eyed one of them is (I’m not gender stereotyping, but it’s not the boy) and the end of another era passes on by.

Oh, and those fridge leads? We arrive home on the day Llandovery re-opens, beating the incoming rain by half an hour (smug, much). We unpack and there they are, on the van all along, hilariously hiding under the wheel jack. But it’s all good. No camping trip is complete without hot chocolate, anyway…

Rhandirmwyn campsite is open from April until November and has dedicated accessible facilities, plus FREE wifi!