July and everything after: part I 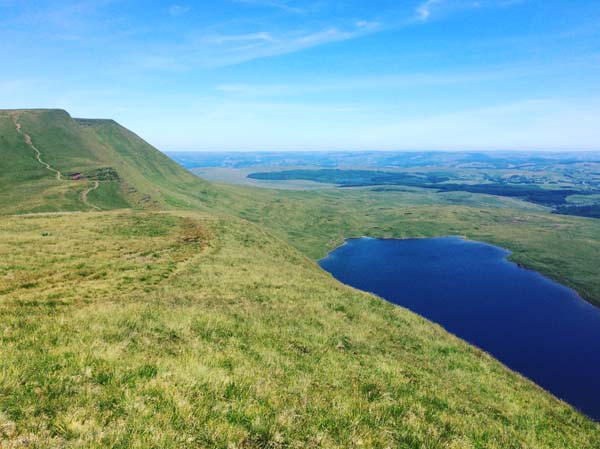 July is joyous. The heatwave goes on and endlessly on and I cram work into all kinds of odd 6ams and 10pms to be outside in it. I head along Fans Hir and Brycheiniog, through cotton grass tipped snow-white against azure, and eat my lunch sitting on the edge of the world. An optimistically-packed mini-roll pools into hot chocolate between my fingers as I pick out the thin red line of a sheep track searing down the nose of Picws Du ahead, and I wonder how many people give that way a go. 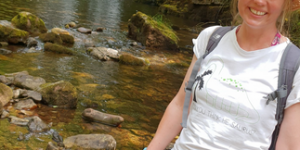 I join South Wales Hikes in stunning Waterfall Country and we work our way around the necklace of Gwladus, y Pannwr, Clun Gwyn and Ddwli – all reduced to teasing trickles – before reaching the diamond in the chain, Sgwd yr Eira. We lunge in for a frosty swim before shivering our way back into clothes, only to get wet again walking behind the curtain of the waterfall, still roaringly mighty in the face of endless heat.

On July 11 I escape to mid Wales for a soul-feeding foray into the Doethie Valley; 13 glorious miles in which I see just the one other hiker and a farmer. The hiker is doing the Cambrian Way from Cardiff and thinks he’ll ‘only’ reach Dolgellau before he has to be back at work. He’s delighted I can pronounce ‘Rhandirmwyn’, where he just stayed and which has been puzzling him. The farmer seems amazed that someone wants to reach his trig point on the top of Pen y Gurnos, but happily waves me through his sheep and it’s the most obscure trig I’ve bagged to date, wonderfully stuck in the middle of the most unremarkable view, given the incredible landscape I know to be fanning out all around. 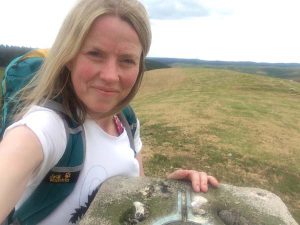 Back at the van I watch the sun dip scarlet across Llyn Brianne, sparking, like Mordor, far west. I eat pasta out of the saucepan while a car pulls up as close to my bumper as it possibly can in such wide open space and the family inside watches Mordor for a minute or two, engine revving, before driving away. I wonder if they had a nice evening out and also if I should head down the road to Rhandirmwyn, because my favourite campsite is there (and because I can pronounce it), but I’m too tired to drive after the 13 miles and the scarlet view through the van’s open door is too tranquilising to move from. 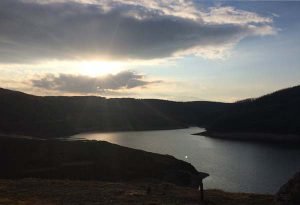 If there were any phone signal, Instagram would tell me I’m wild camping, just like it told me I was wild swimming at Sgwd yr Eira. But I’ve swum in the sea and rivers all my life and I’ve simply been ‘swimming’, so I figure now I’m simply ‘camping’ – and I’m not even sure about that, to be honest, as the luxury of a mattress on a pull-out frame maybe disqualifies me. So I cancel out the camping bit and I’m simply ‘sleeping’ (wild sleeping?) until my alarm goes off at 4.30am and I jump up and hurry across the dam to face the other way for sunrise. But the sun doesn’t rise; there are no fiery reds and ambers to welcome in July 12, just a slow turning of things from inky blue to darkish grey then a slightly lighter grey, and I think what a privilege it is to watch nothing in the middle of such a still, magical nowhere, and go back to bed. 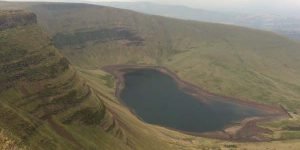 I choose the day the heatwave holds its breath to pick out that sheep track on the side of Picws Du. Under a sky thick and grey I clamber up, the thin red path veering nerve-shreddingly close to nothing in places, and as I broach the cairn the rain comes, warm and persistent. I pass a couple of walkers who seem taken aback by rain on a mountain in Wales and circle my way above the lake of legends, now shrivelled to a misty pool baring ochre sides. All the while I’ve one eye on the rescue shelter below, where I’ve shared I don’t know how many flasks of hot tea and conversations with strangers, and I’m rewarded with a good crowd today; a mountain leader who’s ‘hidden’ four teachers across the Black Mountain for their pupils to find, a couple retrieving tangerines rolling from the mountain leader’s huge pack, and an older gent in shorts. Later, when I’ve dried off in the van and set homewards, I pass him strolling along the lane, still in shorts and now under an umbrella. I offer a lift but he’s content in the rain, and I wind my way on. 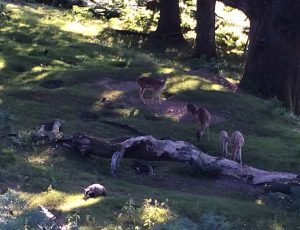 Sometimes, when the teen and teen in training are not with the fun parent, I let them come camping with me too, and we head west to watch badgers. For a breathless hour the world is at peace, the woodland glen turning golden as a Disney-esque cast of badgers, deer, jays, butterflies and, my favourite, a teeny mouse, dances near the hide. We trek to the very tip of Worms Head, her scorched yellows emblazoned by rockpools of turquoise and emerald that surely belong in Greece, not Gower. My mum, a National Trust volunteer who’s along on the walk as the ranger’s backmarker, chats away to children, looks after a man who turns his ankle and helps people over the rocks. And it dawns on me at end of a hot, hard hike that she’s probably the least young person in the rather large group, and I wonder where on earth her energy comes from. 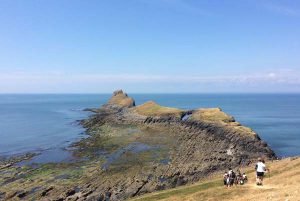 July is joyous. After July will come neurology and I hope to be cheerily waved away, as one might be waved across fields, with farmer-like reassurance, in the direction of an obscure trig point. But for a while now, the pins and needles have been just a little bit stronger and the zaps that happen in my head as I drop to sleep each night have been a little flashier. A bout of sickness is probably just that; a bug, only my ribs feel like they’re being crushed by iron and I don’t usually feel sick in my ribs.

The trouble with mountains is there are so many to climb. And July gives such a tinily finite time in which to climb them all. 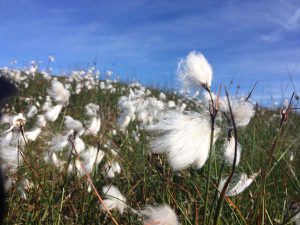