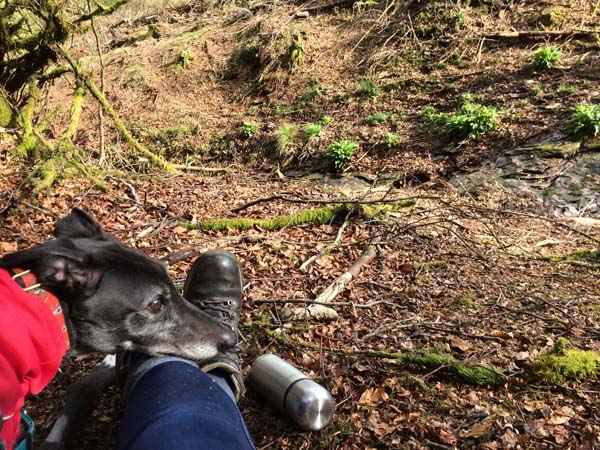 Lionel is sporting a huge bald square on his back and I’m sporting serious bags under my eyes. We fall through the door and collapse into heaps; he on his bed and me on the sofa, although it could so easily be the other way around. It’s gone 7pm and we left home almost 12 hours earlier. We only went to the vet’s.

To be fair, it’s the Special Vet, the one in Bristol. It’s usually an hour’s drive but we have an early appointment, so that involves rush hour (and, it turns out, a slight detour down the M5, as I think we need to be on the M49. Apparently we don’t). The Special Vet says Lionel needs a lumbar puncture and an MRI, and I blink away watery eyes because I’ve had both and I wouldn’t put my worst enemy through one of them (I would cheerfully put my worst enemy through an hour-and-a-half-long MRI, especially if he – supposing the theoretical worst enemy was a he, of course – was desperate for a wee).

I head off to a nice tearoom and pretend to write up some notes for Quiet Walks, but really I’m replaying in my head ‘walks I did with Lionel’ and ‘proper walks I did without Lionel’. I might have mentioned that Lionel is the world’s worst hiking dog and, when he’s not being known as Twpsyn (Google ‘intelligence of dogs by breed’ and see where Greyhounds are listed), he’s being glowered at and known as That Dog – as in, ‘Another walk ruined by That Dog!’

A million times I’ve asked myself how I ended up with That Dog. I’m not even a dog person. When I eventually started to wonder if I could possibly become a dog person, it was very much with a Whippet in mind (at the Special Vet’s there’s a poster on the wall indicating dogs’ weights by breed. Google ‘weight of an XXL Greyhound v. weight of a teeny, cute Whippet and you’ll have an idea of what I was aiming for). At the time I was in an unlovely relationship with someone who really, really wanted a dog. That’s a whole other blog post but, to chop a long story short, I decided I couldn’t possibly commit many years of my life to an oversized male who spoiled every long hike we went on. So I asked him to leave, but I kept the dog. 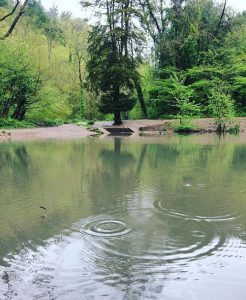 I stop pretending to write the book and head to Blaise Castle Estate for a soothing, post-rain walk, where freshly damp bluebells sparkle against 50 shades of green. I head to the folly and get watery-eyed again, because last time I was here, it was with Lionel. They’re funny, Those Dogs that you never really wanted in the first place. You pay the rehoming fee then find out they need £400 of instant teeth removal. You put them on special (expensive) food because it turns out they have very delicate tummies and you pay many times the £99 excess on the dog insurance because ‘going to the vet’ is your new pastime. You rearrange your entire working week around them because they don’t really like being home alone for more than four hours – five at a push – and you spend lots of holidays camping in Llandovery because all those £99s add up to an annual week in Croatia. You’re even supposed to be at the ballet tonight but you gave away the ticket, because a sneaking instinct whispered that a quick trip to the vet might take 12 hours. And life any other way seems not to have existed.

We’re sent home with a stack of Gabapentin, which I seemed highly likely to be in need of myself a few short months ago. I imagine sharing drugs with a dog (‘Down in one, old boy – one, two, three, go!’) then sleep for Wales until I bolt awake, as early as the weekday alarm even though it’s the weekend, and rush downstairs to check his enormous chest is still rising and gently falling. It is. The unlovely relationship broke many things; my confidence, for a while; my children’s family home; my bank balance. My heart’s still in one piece but, as I cradle a cup of tea and stare at the dog I really didn’t want, I wonder for how long. 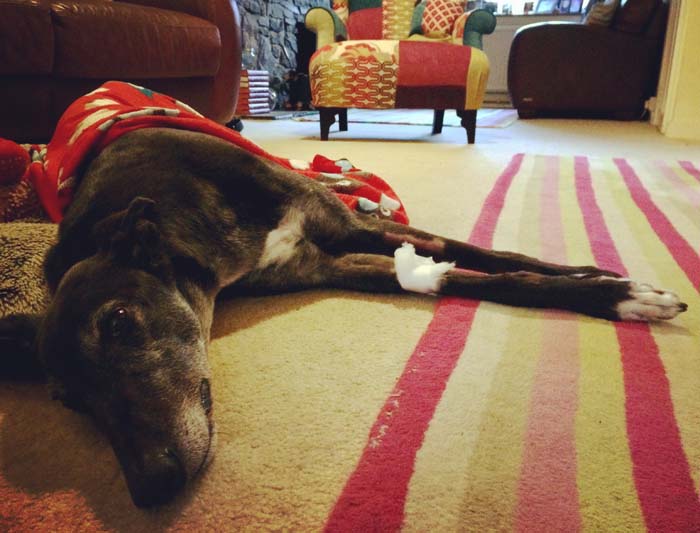