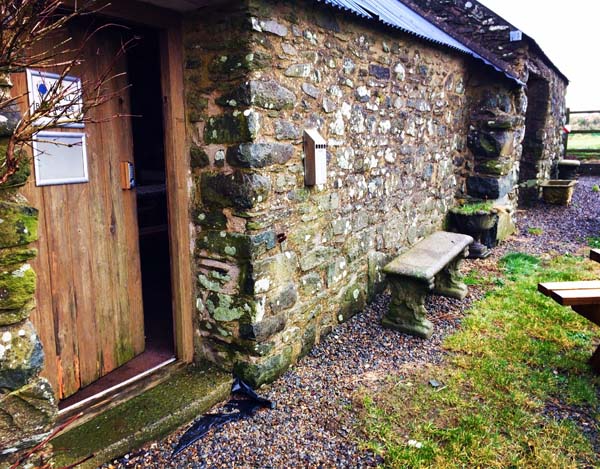 I’m standing under a solitary lamp in otherwise pitch blackness, pressing security code digits for the 114th time. I feel a bit like the drunk guy scraping his key down the front door on a birthday card I once received, and I may or may not be about to cry. 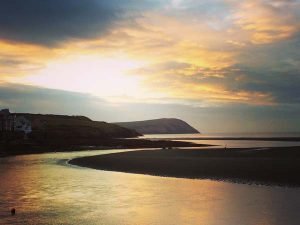 I’ve had a joyous day hiking across Carningli and down onto the Parrog, I’ve eaten fish n’ chips watching the sun set across Newport Sands and the plan was to do a spot of winter camping, because everyone on Instagram’s doing it and I’m a hardy camping kind of girl. But as the weekend nears and the temperature hovers around ‘bone-freezingly cold’, I chicken out and book into the luxury of a cosy bunkhouse on a farm near Abereiddy. Only the farmer has gone out for the night and, save his sheep, some cows and Lionel, there isn’t another living soul for literally miles.

It’s eerily quiet and I realise only one responsible adult in the whole world has the vaguest idea of where I am (come to think of it, he’s only a vaguely responsible adult, diminishing by the second my chances of being found alive). I’m glad of Lionel’s company, until I remember the time he first time he saw a bee. Puzzlement turned to astonishment then to fear, before he practically did a Scooby Doo leap into my arms yelping ‘Huuuhhh? Shaggy!’ I eye Lionel eyeing me from the safety of the van, and press the digits again.

We drive a mile back up the lane in search of signal to phone the farmer. The phone rings merrily to answerphone and I practically sob a ‘help-come-and-rescue-me-I’m-cold-and-very-unhardy’ message for him to chuckle at when he gets out of the pub. I ponder my options. Camp in a bone-freezingly cold van with Scooby Doo or make the two and a half hour drive home. Option B isn’t really an option, as already today I’ve driven more than 100 miles and hiked nearly as many (ok, it was only five but it was very challenging, hardy terrain). Besides, I’ve kind of had to give up driving in the dark until I see the next specialist, as ‘in the dark’ is when I’m at my fuzziest and don’t work very well. So I do what all former Girl Guide patrol leaders would do, and head back down the lane to punch that security keypad again. 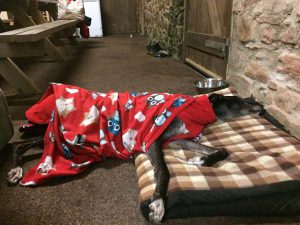 And it works! The numbers pop in obligingly (the farmer later cheerily surmises that the number six seized up over winter – excuse me while I grip my sides chortling) and the door swings open to indeed reveal the height of luxury. Twelve bunks to choose from! An electric kettle! A hot shower! Scooby, who is not a hiking dog at the best of times and is exhausted from the five miles and watching me sob into a coded door, collapses into an epic bed fail next to his mattress, and goes to sleep without his tea.

After a blissfully scalding shower I collapse into a similar heap on my bunk – the third one I try out – and into the kind of dead sleep that only ever happens when I’m camping (or pretending to in a bunkhouse), until I’m frightened awake at 3am by the sound of a distinctly living soul scuffling around the bunks. I leap up, cracking my head on the bed above, to come face to face with Lionel’s nose and sorrowfully accusing eyes that say: “Huhh? I was only wondering if it’s teatime yet, Shaggy!” He slinks off back to his bed fail and I fall back into my dead sleep until a tunnel of morning slants onto my bunk and a gentle alarm of birdsong brings the wonderful promise of a freezing new day.

The kettle sings into life and Lionel tucks into last night’s tea. I pop outside to look at daylight and see the glorious west Wales coast stretching away from the bunkhouse. Bloody hell, I think; this is AMAZING! I really can’t wait to come winter camping again! 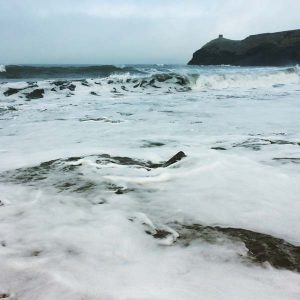