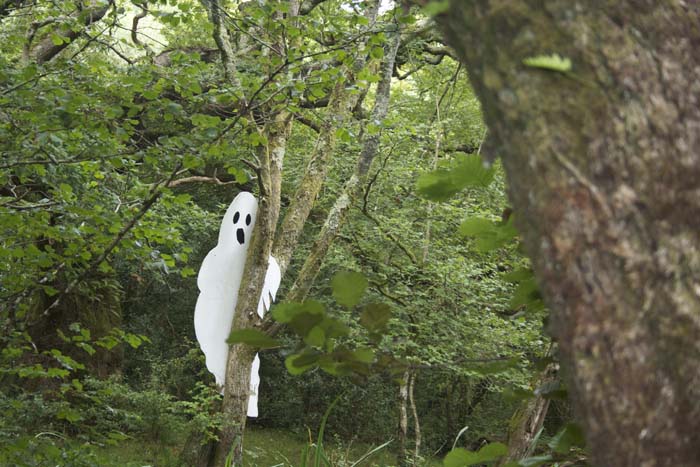 Hallowe’en is here and what better way to celebrate than to escape outdoors in search of spooky adventure? Here’s my round-up of the best south Wales walks to get the ghostly goings-on underway! No matter how many adventure parks you’ve visited, I’ll bet my best woolly walking hat you’ve never been anywhere like Clerkenhill! The whole farm teems with quirky charm but the mile-long Spooky Wood walk really has to be seen to be believed… if you dare to enter! Run the gauntlet through the bears’ cave, counting the ghosts in the trees to reach the other side – if you don’t get caught by the basking shark, a giant or a very angry farmer’s wife first! There’s an admission charge to enter the farm but it’s worth every penny! Margam’s history dates back to the building of a monastery in the Dark Ages and, with so many residents passing through the centuries, it’s no wonder it’s said to be haunted! There are so many trails to enjoy here, including a walk to the medieval ruined abbey or a hike onto the hills above the parkland. All ghostly walks, however, must start and end at the castle – said to be inhabited by a gamekeeper who was murdered by a poacher and where the sound of giggling children can often be heard in the corridors… It’s hard to imagine anything sinister going on in the pretty riverside town of Usk, with its upmarket coffee shops and flowers cascading from hanging baskets at every turn. Take a trip behind the main streets, however, and the atmosphere turns decidedly chilly. A stone’s throw from the riverbank is an old, disused railway tunnel that takes some nerve to get through. It’s very, very dark inside, with such an uneven floor that the things that go bump in the night include those who walk from one end to another! Watch out for the drips of freezing water from above… and good luck making it out the other side! Not far from the popular beaches of Ogmore and Porthcawl is a much lonelier spot deep in the woods, in which stands the ivy-covered ruin of Candleston Castle. It’s said that near here was a village called Treganlaw – the Place of a Hundred Hands – but the land was gradually covered by sand blowing in from the dunes and the residents had to flee. Start your walk at Ogmore Castle – crossing the famous stepping stones over the river if you’re brave enough – and stroll along the lane for about a mile to reach Merthyr Mawr Warren car park and Candleston’s remains. If you can make the leg-wobbling climb to the top of ‘the Big Dipper’ – one of the highest dunes in Europe – you’ll be rewarded with stunning views; just don’t get caught out by the rising tide as you return over the stepping stones.

5. The Lady of the Lake, Llyn y Fan Fach, Carmarthenshire The sparkling cobalt waters of Llyn y Fan Fach have been listed by Lonely Planet as one of the 1,000 must-sees in the world, but conjure up a swirling Beacons mist and the breathtaking scenery can quickly morph into eerie isolation. Legend has it that a local farmer married a beautiful woman called Nelferch after seeing her combing her golden hair in the water’s reflection, but he caused her great unhappiness and she returned to the lake forever. Llyn y Fan Fach is easily accessible along a track from Blaenau Farm and from the lake you can climb up onto Picws Du for far-reaching views across the Beacons and Carmarthenshire. But it’s a steep haul and the mountains are extremely changeable, so going well equipped is essential.