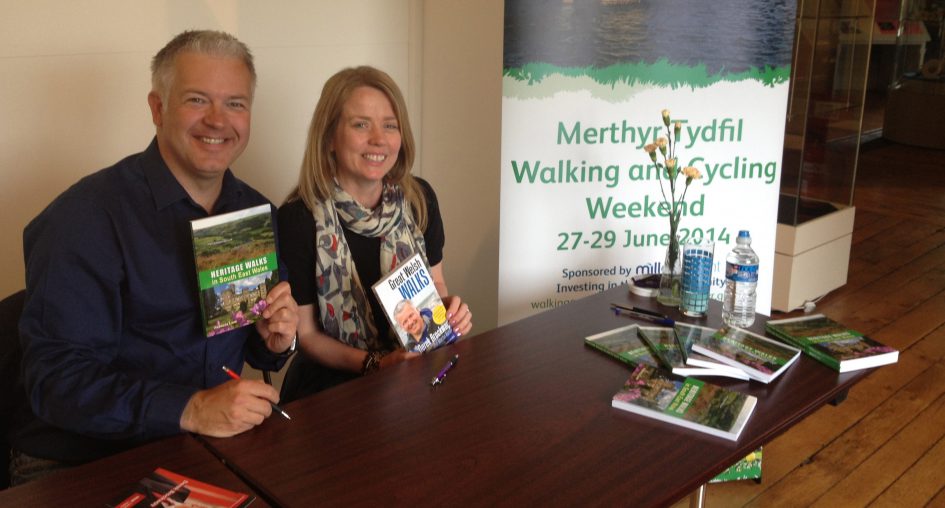 There are some people in my queue. I’m sitting at an official book-signing table, flanked by Derek the Weatherman and two pop-up banners, and I actually have my own queue.

Unfortunately, the people in it think I am Derek’s PA and are offering me money, eager to jump in his queue with newly-purchased Great Welsh Walks fresh for the signing. I point out the proper cash desk and shuffle an optimistic collection of pens.

I’m in an elegant room at Cyfarthfa Castle with Derek Brockway, piles of our respective walking books fanning out over the table. Through the window, Day Two of Merthyr’s Walking and Cycling Weekend is getting underway in Cyfarthfa’s glorious grounds and the signing has been timed to make the most of keen walkers as they arrive. There is an eager doors-open rush and – I sign some books! I wonder if Merthyr’s park rangers and Cyfarthfa museum staff count and I decide they most definitely do.

A non-staff, non-ranger man picks up my book and peruses it with what appears to be genuine interest. I select a pen. Then he hands it to my fellow signee. “I’ll take this one, Derek!” he says in knowing, matey way.

Derek hands it back to him and tells him it’s mine. The man tosses it down. He doesn’t want it after all; he wants Derek’s. Derek suggests he could buy them both but the man doesn’t hear and heads for the proper cash desk with Great Welsh Walks, tenner firmly in hand.

Some visitors do buy my book but it’s because, I suspect, they think they have to, in some kind of reverse BOGOF deal. I’m sure some of them would like me to BOGOF so they can bestow their full attention on Derek, but it doesn’t seem to occur to them that they could simply walk past my queue and they politely hand over their copies of Heritage Walks for me to sign, wondering who on earth I am.

Then a kindly man is saying hello, well-fancy-you-writing-books, and I realise it’s Alan, the lovely man who used to mow my lawn. We have a chat about my lawn and my children and the Valleys, and it turns out he grew up in Nantyglo. There’s lots of description of Nantyglo and its quirky roundhouses in my book, but none so sparkling as Alan’s account of a childhood friend’s one-up, one-down and the woman who used to inspect his hair for nits in Market Row. He’s travelled from Caerphilly to buy my book and doesn’t seem to even realise there’s a whole other queue going on to the left.

Clever work with children and animals

Five minutes later, my friend Ruth is at the table in a surprise visit, which would have indeed been a fabulous surprise had she not mentioned it in the pub the night before. She’s brought her daughter and her mum, who’s a huge Derek fan and is deftly persuading him to pose for a photo displaying his bare calves and shoes. Then, in true buses-at-once fashion, my friend Lucie arrives with her family and all of a sudden I have a queue full of friends, nans and children, and the pens are needed.

Then comes an actual surprise visit from friends who are supposed to be en-route to Tenby but have made a last-gasp detour to Cyfarthfa after a fraught morning searching for a lost key, packing children, soft toys and a dog (a real one) into the car and battling through Merthyr’s horrendous roadworks. Ten minutes of book signing remain and Max the dog is determined to have his photo taken with Derek. It’s wonderfully chaotic, no one is being asked to show their calves and the book signing ends in the best possible fashion.

Throughout the afternoon Twitter is awash with walking book hashtags, retweets and fetching photos of the star of the show (Max the dog). My ‘sale-or-return’ returns pile is not insignificant but I deem the event a resounding success. I have a signed copy of Great Welsh Walks for my mum, wonderful friends and Alan the gardener. If there’s going to be another walking and cycling weekend next year – book me now!